One year ago, I experienced a breakthrough in the marathon.  Going into CIM 2019, my PB was a 3:06:57.  It dropped by over 23 minutes to a 2:43:18.  While I was proud of these numbers, it is the feeling of finally feeling strong right until the end of the race that was a first and something I will remember for life.

That feeling, of leaving it all on the course simultaneous to finishing strong, is a feeling I hope every runner gets at least once in a race. My previous four marathons had all involved stopping/walking by about 28km and slogging it out the next 14km to finish.

Five months before CIM, I was off running rehabbing a broken foot and decided I wanted to go for a big goal in the marathon. (Nothing like being off for a few months to let those crazy dreams take form!).  As a coach now, part of me cringes with the audacity of me calling up Kate and telling her my goal, when I wasn’t even allowed to cycle yet.  But a larger part of me thinks more athletes need to “go there” in verbalizing their crazy dreams.  They are nothing to apologize for and they’re not life and death, goals can be delayed or tried again if need be.

Saying your goal is one thing, it’s like striking a match. But are we lighting a tealight or a bonfire? There needs to be depth, follow-through, and likely behavioural changes. 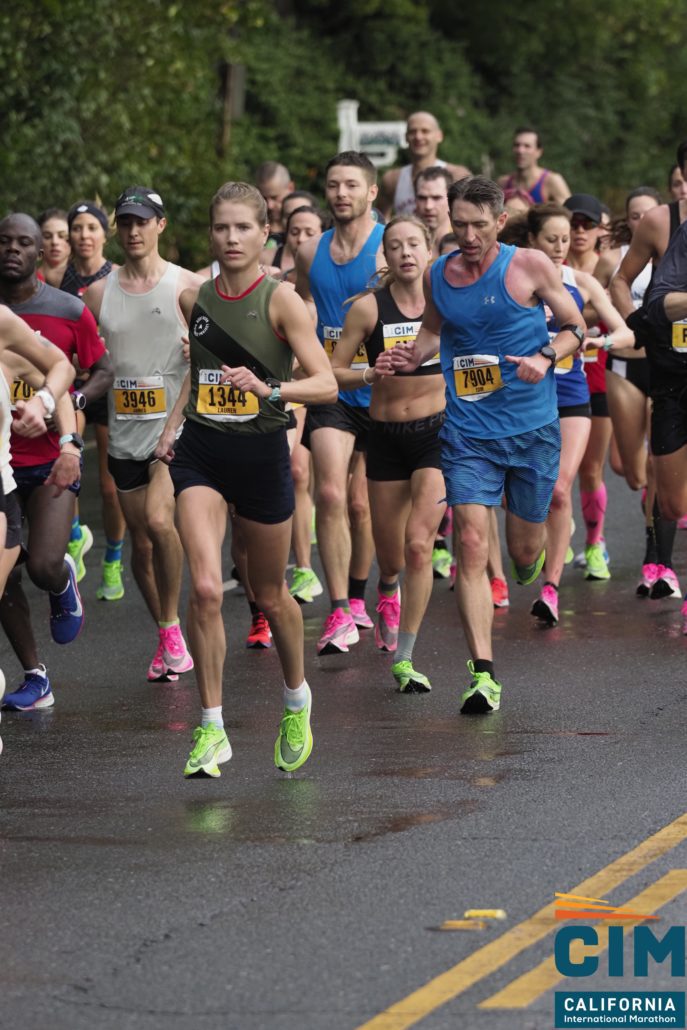 Below are what I consider to be the top five factors leading to the breakthrough:

Trust: I had never fully let go of control in previous training cycles. What do I mean by that? If my coach said “No faster than a 3:40/km”, I’d run a 3:37.  If she gave me optional runs based on how my body was feeling, I would always run. In my head, I was illustrating my dedication, but what I was actually doing was sabotaging my own training by constantly pushing it.

This time, I had been brought to my knees enough to, in the words of Kendrick Lamar, “Sit down and be humble”.  I told Kate I was willing to do anything it took, and for many of us runners, being willing to do anything it takes is not the perseverance of nailing a tough workout or high mileage weeks, it’s the perseverance involved with listening to our bodies.  It’s the perseverance of trusting when coach says “5:30+++” recovery pace, you actually go 5:35.  Over the coming months, I started to see this shift reflected in a stronger body, in PB’s set in the build itself, and in momentum of trust building between my coach and I.  Going into CIM, I hadn’t ran beyond 16km straight at marathon race pace. There were many unknowns in how my body would respond to the giant recipe that is training adaptation and taper.  I had to trust Kate, trust my body, and trust my heart.

Self Belief: I lacked self belief in my previous marathons. I expected my body to break down mid-race and it did. I used to jokingly call myself Humpty Dumpty. I expected a large positive split, so it happened. I expected to stop on the side of the road, because I always had, so I did.

This time, I flipped everything. I used every challenging life experience as fuel in my comeback, in the training workouts, and in the race itself.  I took training one day at a time.  Even in my personal life, I started to tune out opinions from people who didn’t know me well or perhaps thought I wasn’t ready. I tuned into people who knew me well and could tell I was on the path to making a strong race happen.  When in doubt, I often asked myself what my coach would do.  Or what Michelle Obama would do.

Strength work: This was years in the making but it finally seemed to pay off in this marathon build.  I had been off for about three months before starting this build but was able to focus on strength as my foot healed and could tolerate weight.  I put on muscle, I strengthened my core, and I used strength and cross training to remain in the athlete mindset while injured. I continued strength 2 x week in the marathon build and eventually reduced it to one day of weighted strength and one day of band/postural/core strength.  It was strength that allowed my last km split to be a 3:35/km.

Fuel and Recovery: Another mental shift; I began to view the time between workouts as the greatest determinant of fitness improvement.  I brought fuel (protein mix and carbohydrate) to consume post workout immediately after a training run.  I ate a real breakfast before all long runs and workouts.  I snacked a lot more and ate high calorie and high nutrient-dense meals.  I actually practiced taking my gels every 6km in my long runs and at one point, Kate had me tracking liquid hydration too.  We were dialed in and I was beginning to learn what it took from a fuelling perspective to perform toward my potential.   Recovery became a huge priority too, not just the rolling but ensuring I was getting enough sleep. I think for many people, finding the time to actually get enough recovery is perhaps the greatest hurdle in their improvement curves.

Going Inwards: The last couple weeks before CIM I went inwards. I started to journal and deleted the IG app off my phone (another tip from Coach Kate!).  I read and watched stories of athletes who had overcome significant challenges.  I looked back on my own life and how far I had come.  Most of all, I became deeply grateful for the people who have been there for me over the years.  I vowed to run 1km for each of these people after the 28km mark, where I’d always stopped before.  I became keenly aware of the privilege I had to train and test my body and spirit in this way.

Before the gun went off at 7am December 8, 2019, I was standing in the 3:15 corral (Kate told me to start way back from the OTQ women’s pace group so I took that to heart).  I was surrounded shoulder to shoulder by strangers but felt like they were my family.  I was wondering what I had gotten myself into and if I could get out of it somehow.  In a moment of panic, I looked up at the pink dawn in the sky and felt a deep acceptance come over me.   “All I have to do today is persevere” … I never had believed in race mantras as they felt tacky to me but today, and for every day forward, this would be mine.

Our talented Team of Coaches are at the heart of Mile2Marathon. They include some of the best distance runners Canada has ever seen and use their experience and expertise to provide thoughtful coaching tailored to each athlete’s individual abilities, goals, and schedule.