With the First Half 1/2 marathon coming up quick, we wanted to get you guys prepared for what to expect on race day. At first glance this course looks pretty easy and fast. A little loop around Yaletown and then out along English Bay, around Stanley Park and back. A lot of Vancouverites are familiar with this route, covering parts of it in training. But it’s not as easy as it looks, especially the last 6k.

Here’s our breakdown for you:
0-5km: This part of the course is pretty straight forward. Your GPS might go wonky on you passing under the viaduct near BC place. Don’t panic, keep running, please don’t complain when Strava tells you, you only ran 20.9k – the course is certified folks! If you’re having a bad day the race goes past the start/finish area at ~1mile, if you’re thinking about bailing out this is the time to do it. The uphill along Pacific Blvd at ~2k comes early enough that you don’t really notice it. Heading out along English Bay you might notice a bit of a head wind. Just tuck in behind someone. Be thankful you’re not 6’2″/155lb, in which case there aren’t too many runners that make for a good shield.

5-10km: The sharp little hill up off the seawall can sting, even this early in the race. And the tight turns to go through the tunnel under Stanley Park Dr are going to slow you down a bit. Don’t try to be a hero and blast around these tight corners. They are often slick with mud and you might end up on your arse like our friend Kelly Wiebe did back in 2014. If it’s a windy day you might get hit with it as you scoot up towards Brockton Point. A wind coming in that direction would actually be a good thing, as it would then be at your back/side along the far side of the wall. So bear with it. Don’t fall into the Burrard Inlet around Brockton Point, please.

10-15km: Ok, we know the seawall is flat as a pancake and therefore should be fast running. But there are lots of sharp little twists and turns around the wall that can break up your rhythm. When you’re having a tough day these turns just keeping slowing you down more and more. A strong headwind from Brockton Point to Lions Gate is likely and a real nuisance, but just try to not to fight it too much. Also it’s really sandy right now as you approach Si’wash Rock. The City of Vancouver threw down 4th Beach there a few weeks back to try to get rid of the ice. It’ll be a mess on a wet day. Be ready for it. 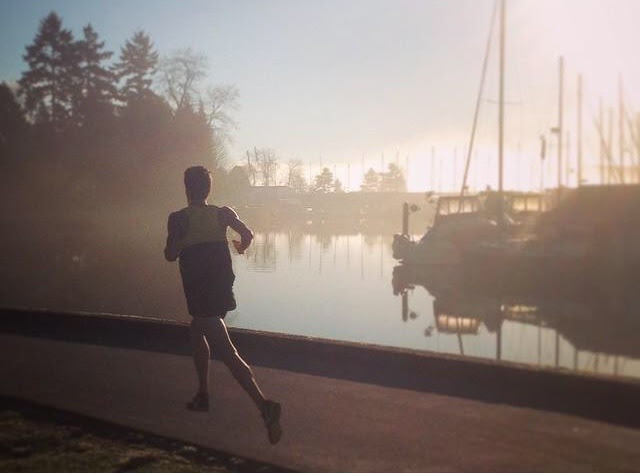 15-20.5km: You hit the gravel path around Lost Lagoon just past 15k. If you were feeling good up to this point, well count your lucky stars, because you won’t for much longer. The gravel throws you off your rhythm and slows you down. This is usually the point in a half-marathon when you start to regret signing up for the race and that ~1k section around the Lagoon really makes you question why the heck you’re out there and not sipping on a latte at Musette Caffe instead. Once you’re clear of the gravel you get hit with a few short steep hills that on any other day you probably wouldn’t notice. But they feel like bloody mountains at the end of this race. They completely trash your legs and make you scramble hard to get back up to speed and find a good rhythm again. The first comes at ~17k, out of the tunnel heading out of Stanley Park. The next comes at the driveway of the Aquatic Ctr. And the final doozy comes right at 20.5k, under the Granville St bridge. Be prepared to hurt and to loose a good 30 seconds in this section.

20.5-21.1k: Once you get up onto Pacific Blvd again it’s a clear shot downhill to the finish. You can see that freakin’ finish line forever though. At that point you just put your head down and go for it!

Yikes, we just made that course sound terrible. It’s not. In fact it’s really nice and on a good day it’s fast. But, we just want you to be prepared for the worst. Thank us after, when it’s better than we described it.